The first Atomic attack on a city as seen by witnesses

This exhibition is co-sponsored by Hiroshima Nagasaki Day Coalition (HNDC) and Artspace Gallery. Images are courtesy of the Hiroshima Peace Memorial Museum. Curated by Katy McCormick.

View the project online at http://imagearts.ryerson.ca/hiroshima/.

Caution: These images depict horrific injury resulting from weapons of mass destruction (WMD). Although they are difficult to look at, they render scenes burned into the memories of survivors. Please do not decontextualize or reproduce these images without permission. 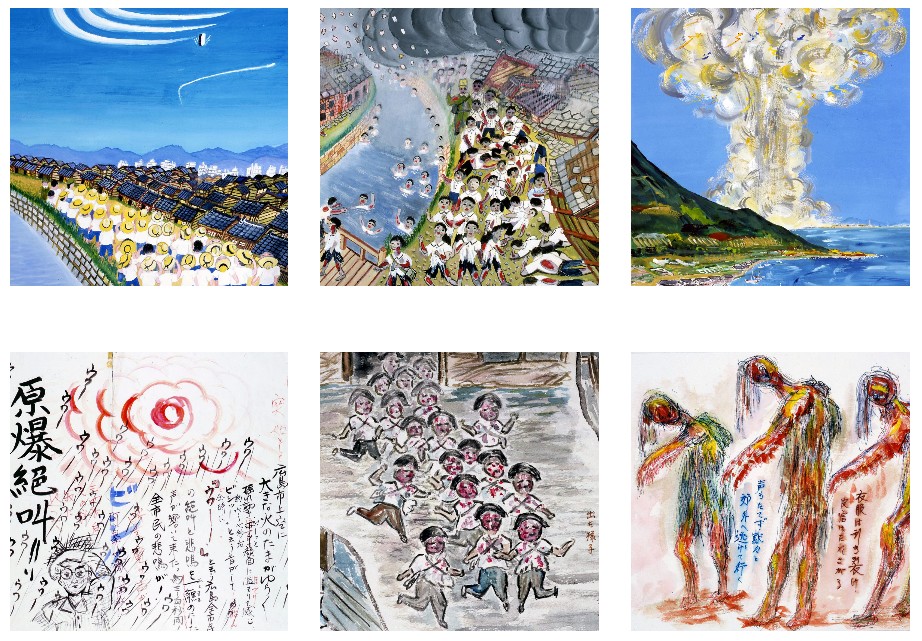 On August 6th, 75 years ago, one U.S. B29 bomber dropped one bomb, code-named Little Boy, on the city of Hiroshima at 8:15 a.m. without warning. The destruction it loosened upon the city’s 300,000 inhabitants was unimaginable. Never had such a fierce weapon existed: its flash released heat up to one million degrees centigrade, the shock wave toppled some 60,000 buildings, a firestorm erupted that burned four square miles. Radioactive oily black rain fell—and many gasping for water opened their mouths to drink it. Some 70,000 people perished instantly or within days, due to radiation poisoning and other grave injuries; 70,000 more died before the end of the year. Those exposed to radioactivity faced punishing illnesses, cancers, and disorders such as bone crushing fatigue and recurring bleeding. Due to the censorship imposed over the seven-year U.S. Occupation, personal stories were repressed, but not forgotten. More than 25 years after the bombing, survivors were asked to make drawings of what they remembered of that day, reflecting their harrowing memories. These images were donated to the Hiroshima Peace Memorial Museum, whose mission is to witness and educate about the devastating effects of nuclear warfare—and to prevent its ever happening again.

Image: Hideo Kimura, 12 years old, on the Nishi-Ohashi Bridge, 2,150M from the explosion at 8:15 – 8:30 am on August 6, 1945: “My classmates were screaming. Burned on their faces, arms, feet, legs, and backs. Trapped under heavy gates and houses, they screamed for help. Some were crying for help from the river, holding onto the stone embankment against the pull of the rising tide.” Courtesy of the Hiroshima Peace Memorial Museum.